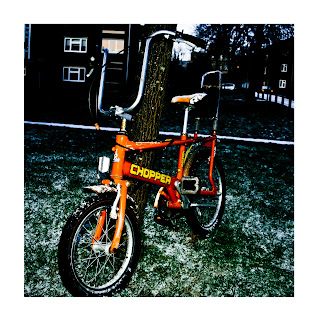 Saturday, 8 January 2011
A few weeks ago this red Chopper appeared, locked to the tree in front of my flat.
A wave of old sentiments washed over me.
I was transported back to my youth, where such a bicycle was definitely 'The One'.
I spent many years wishing I had one, making do in the meantime with 'backies' from friends who did have them.
What was it about this long-saddled beast that was so attractive to so many children of the seventies.
Was it the relaxed handlebars? Was it the luxurious backrest? The fact that the rear wheel was bigger than the front? Or maybe it's just that choppers were cool and funky.
Once I'd realised I would never have my own Chopper, I spent some time one balmy summer, pimping my own bike. 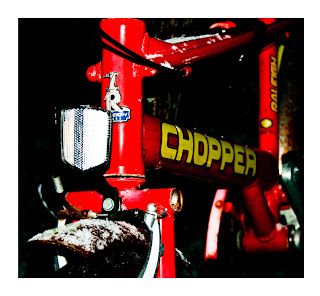 I cleaned it to within an inch of its life before spraying it gold. Then I painstakingly applied black stripes, creating the ultimate zoo-themed ride.
Next, with a peg, I attached a small piece of cardboard to flap against the rear spokes as the wheels spun to make a satisfying purring sound.
As a child, I may not have had a chopper, but I certainly had a lot of fun and pride riding my tiger-striped two wheeler!
Posted by Linda Velovangelista at 20:13

Bicycle marketing and advocacy of a Cycle Chic nature is long overdue in Brighton & Hove. Our special city has a mixed, diverse bunch of people, many choosing the bicycle as a way of getting around. Brighton Cycle Chic are a collective of bloggers and photographers with an interest in creating sporadic commentary on the social culture of our city and how bikes are part of that.

It’s about the people who characterise the city and their relationship with all things bike.

If there's anything you'd like to suggest or contribute please do email: lindavelo@googlemail.com